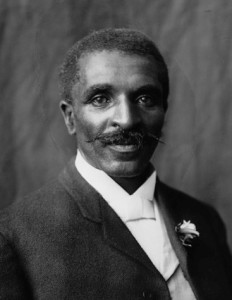 “How far you go in life depends on your being tender with the young, compassionate with the aged, sympathetic with the striving and tolerant of the weak and strong. Because someday in your life you will have been all of these.”- George Washington Carver

* 1865 – Slavery is abolished in Missouri. As a child, George was orphaned, so his former masters raised him as their son and made sure he learned to read and write. He was frail and could not perform difficult farm work, so he spent a lot of time wandering fields and woods, where he took an interest in plants, and eventually became known by friends and family as “The Plant Doctor.”

* 1890 – George took art classes at Simpson College in Iowa, where he loved to draw and paint plants.

* 1891 – He was the first African-American student at Iowa State, where he earned a bachelor’s and master’s degree in botany, the study of plants.

* 1897 – Carver was a hired to run the Agricultural Department at Tuskegee Institute, a new college for African-Americans run by Booker T. Washington. 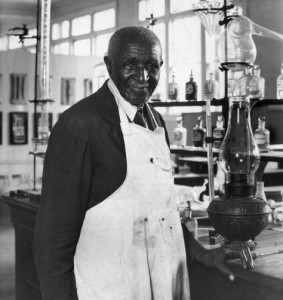 “No individual has any right to come into the world and go out of it without leaving behind him distinct and legitimate reasons for having passed through it.” George Washington Carver

* 1897-1943 Carver taught and performed agricultural experiments in his laboratory. He created the Jesup Agricultural Wagon so he could travel around and perform teaching demonstrations of his experiments for farmers. Carver taught southern farmers to use crop rotation to maintain rich soil for successful planting, and then, due to an abundance of peanuts after the crop rotation proved effective, Carver discovered almost 300 valuable uses for peanuts: shampoo, mayonnaise, paints, coffee, cooking oil, dyes for clothing, plastics, and fuel for cars.

* 1943 – Carver died and was buried at Tuskegee next to his friend, Booker T. Washington. His entire life savings was donated to the Carver Museum and the George Washington Carver Foundation.

Info compiled from various sources including: